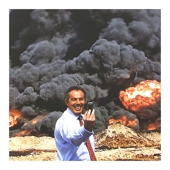 artrepublic suggestions for ‘Loaded’ readers include Richard Burton’s 'Nightmare 1st Marriage’ by Pure Evil, whose rise in popularity has been meteoric following his appearance on ‘The Apprentice.’ A great affordable print featured is Static’s ‘Right Hand Red’ which combines elements of street and fine art in a powerful twist on a game of Twister.

Richard Duardo’s cheeky ‘R U Looking at my Arse?’ looks like a befitting suggestion for the ‘lad’s mag’ article. Whilst Ben Allen’s ‘Union Jack Skull’ adds some popular patriotism to the glossy spread. Loaded chose Kennardphillipps’ ‘Photo Op’, with former PM Tony Blair taking a snap of himself smugly grinning as a war wages behind him, as their top pic declaring that the limited edition “looks cool”.