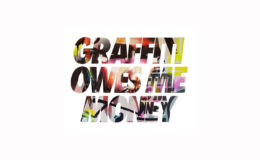 artrepublic Brighton are delighted to exhibit and celebrate the work of graffiti legend Aroe at our gallery, launching on 29th March with a Private View. If you’ve not heard of him you have definitely seen his work. For years his graffiti has dominated the streets of Brighton, cementing himself as a cultural force and public figure. He was often seen spraying up a wall of his choice in broad daylight, letting his natural charisma placate the startled public, and his faux-blasé attitude confound the police. It seems that he ran out of walls here in Brighton and turned to canvas. Not before continuing his work internationally from Brazil to Syria. Most recently a collection of his canvases was placed in the ‘Aroe Suite’ in the Palms Hotel Casino in Las Vegas. He’s come a long way from being shot at by the Milano police for painting trains, and artrepublic are thrilled to have his work featured in the gallery. In the words of Andy Warhol, ‘Art is what you can get away with.’, and Aroe just keeps on doing just that. 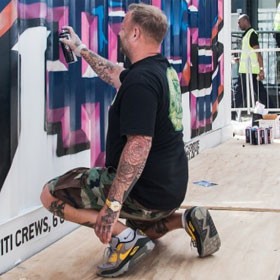 Aroe’s work is the refreshing antithesis to the norm of what is usually seen in the art world. He didn’t come from privilege, with a working class background and relatively dysfunctional home life. The medium which he has perfected is technically illegal. He didn’t ask for permission, his works were not projects that underwent multiple revisions and they weren’t planned. He began with cheap spray paint, raw talent and pure tenacity. His success is due to his persistence and his courage, realising from a young age that a can of spray paint was what he was going to work with for the rest of his life. Not letting anyone or anything stop him is part of his legacy and who he is as a person. The work isn’t politicised, romanticised or commercialised. It just is. What his work unintentionally does is break down the barriers between class and art. He didn't reach his success through lofty connections or an expensive tuition, he simply worked until it came. 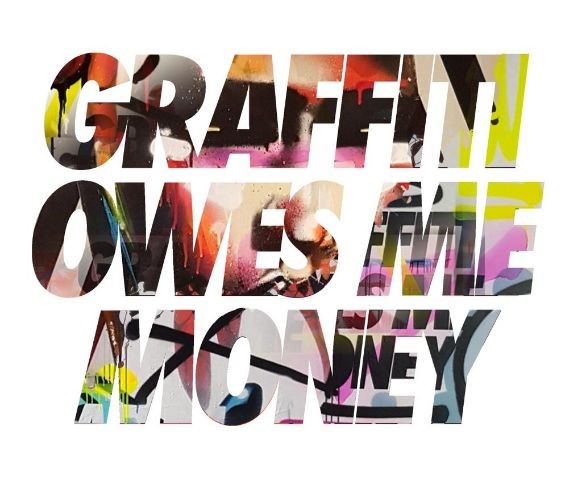 It has been exciting to witness Aroe’s artistic development. He secured his position on the streets stylistically with his block type as opposed to the traditional wild style usually opted for by artists. This gave his work - which was mainly his name - readability. He was influenced by types that he saw in advertising, such as the one of the Yorkie bar. The boldness and simplicity suited him, he wanted everyone to see his name everywhere. Aroe used the familiarity that the advertising type to then experiment with form. Putting the letters on a slant, inverting the colour scheme or having lasers cut through the words is now beheld with an acceptability from the viewers. In a way, Aroe lured us into a false sense of security with what we’ve seen before, just to subvert it entirely and make it his own. Influenced by the British b-boy culture in the eighties, hip hop and fashion, these electrify his work with a freshness and an energy rarely seen.

Now Aroe is exhibiting his most recent collection ‘Graffiti Owes Me Money’ at artrepublic Brighton from 29th March. A celebration of hip hop culture and his own focused style and use of colour. Now experimenting with dimension, shape and geometric lines, the work is futuristically abstract. Dynamic, powerful and beautiful, the pieces have the impact of a graffiti blockbuster and the finesse of fine art. Aroe is merging the world on the street and the often inaccessible art world to produce work that is engaging to a wider audience, and stunning.

If you'd like to attend the Private View of Aroe 'Graffiti Owes Me Money’ on 29th March at the artrepublic gallery in Brighton, please visit our Eventbrite page for FREE tickets. We will have special limited editions of the ‘Grace Jones’ pieces available on the night, alongside the highly sought after original canvases too.

In true Aroe fashion he’ll also have a 1979 vintage Porsche covered his graffiti parked outside the exhibition, because he can.