From bizarre newspaper cuttings to Renaissance influences, Cosmo Sarson walks us through the ideas behind – and forerunners to – his painting for artrepublic’s Modern Masters exhibition. 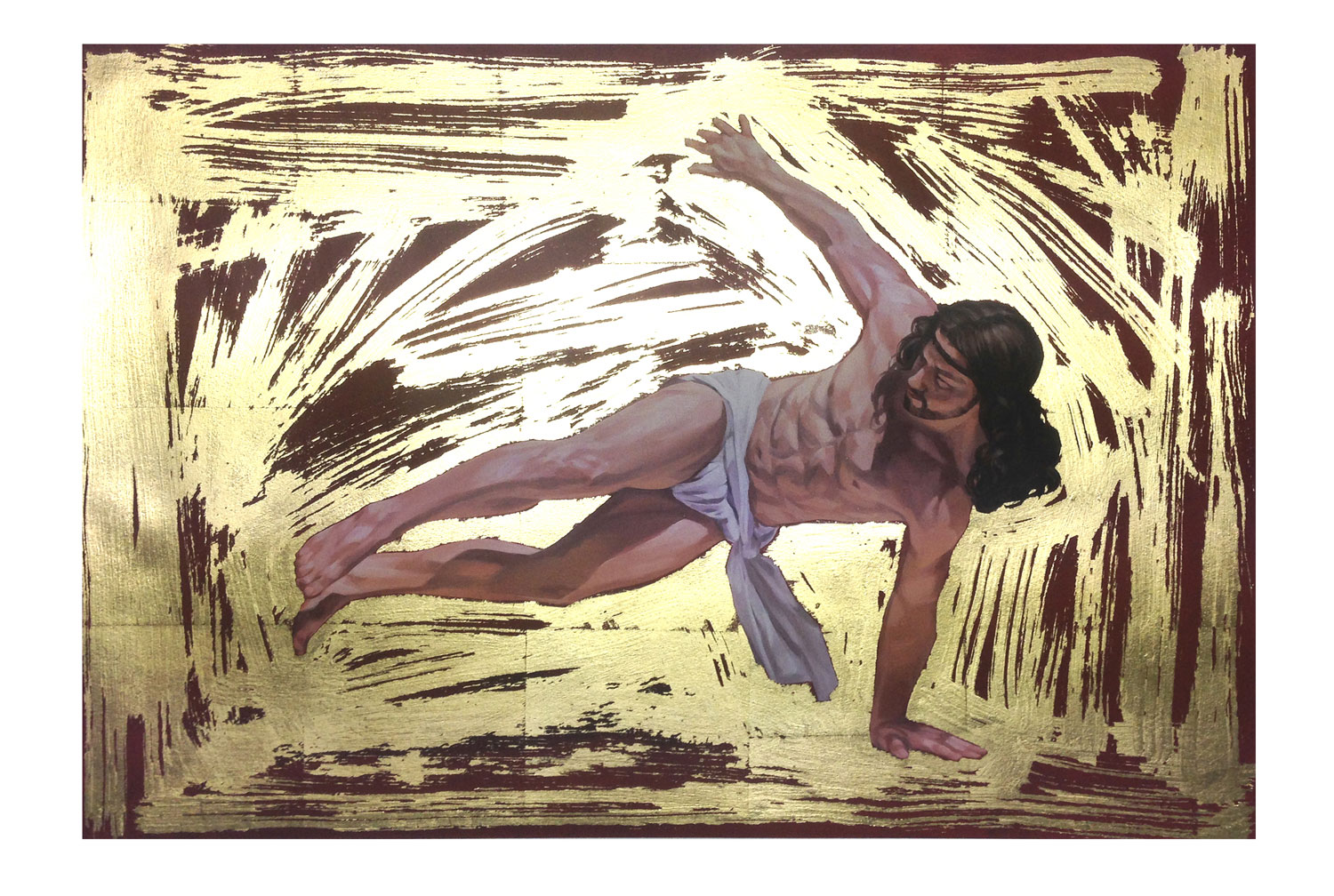 Having gained global news coverage for his ‘Break-dancing Jesus’ mural – painted opposite a well-known Banksy in Bristol back in 2013 – Cosmo Sarson brought his (literally) glittering work to Brighton at the start of this year, sharing his ‘Angel of Brighton’ mural in the heart of the North Laines. Bringing classical style to the streets (and other mediums) with work that like the Old Masters often features religious figures and iconography, Sarson fit the bill for our Modern Masters exhibition. Here he shares some insights into his old-meets-new imagery and tells us the story behind his work for the show at the artrepublic gallery.

‘I studied fine art at the Byam Shaw School of Art and was taught and mentored by two of Britain’s best artists – Peter Kennard and Peter Doig. Both very different artists, they influenced me in diverse ways, in terms of my ideas and my love of paint itself as this sexy, gooey substance.

The Byam Shaw was the sister school to the Slade and had a great life drawing and painting tradition, but it also had a very conceptual edge to it. The principal at the time had just come from directing the Serpentine Gallery and had a fantastic address book that brought in the most cutting-edge artists as visiting lecturers that you just wouldn't get in any other art school.

So while I come from a very traditional schooling it has also given me a contemporary outlook.

This I try to keep in my own work by mixing the old with the new, so the idea of 'modern masters' I find very appealing.

I scour the papers every day for the bizarre and shocking, tearing out images and have a large box of cuttings and my studio walls are covered in them. I try to find things that remind me of old paintings or images that I can appropriate and lift in combination with something else to create something new. I suppose this reminds me of Peter Kennard’s work in a way, the idea of collaging, but I also remember Peter Doig telling me he did this too and had a suitcase full of them. I'll sit on these images for years and then one day remember something I cut out and use it for a painting. My ‘Break-dancing Jesus’ painting came about this way, from an old scrap I saved about a Polish youth group being invited to dance for Pope John Paul in the Vatican.

The painting I'm exhibiting as part of artrepublic’s Modern Masters exhibition is a play on two ideas; that of my ‘Break-dancing Jesus’ and the reference to Francis Bacon’s 'Screaming Pope', who was actually referencing another painting by Velasquez – ‘Portrait of Innocent X’ combined with a still from the film Battleship Potemkin.

I've re imagined Bacon’s version and attempted to bring it back into the classical figurative tradition from which Bacon was trying to escape. If you look at the composition you'll also notice that the window forms a cross above Jesus' head, to be seen as a sign of his impending crucifixion or as the cross he has just gotten down from to dance in front of the Pope. It's as if Christ has come back to life to show the church the way.

I suppose if I could hang this alongside any Master the obvious choice would be the paintings I've just referenced by Velasquez and Bacon. Maybe an El Greco too, perhaps 'Christ Driving The Trades From The Temple' might be apt for the chaos caused by Christ in that scene. Having said that, they are Masters for good reason and I'm not worthy of hanging alongside them just yet.’

Cosmo Sarson’s work will be exhibited as part of our Modern Masters exhibition, 13th July to 15th August 2018 at artrepublic Brighton.