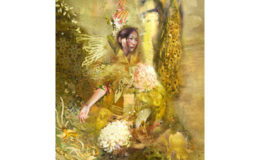 Discard the idea of silence in the studio, explore big ideas and challenge accepted truths – artist Iva Troj shares some insights into how she masters her artistic process. 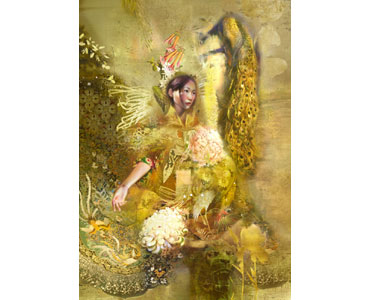 Through complex scenes, assembled in a classic Flemish style (layering mediums that include pastels, acrylics and oil paints between thin coats of varnish) Modern Master Iva Troj shares a unique and powerful view of the world. Reappropriating the traditional styling and motifs of art history – from Renaissance nudes to Japanese landscapes – she makes art that binds the historical to the present day, forcing us to question the real and imagined structures and stories around us.

Ahead of artrepublic’s Modern Masters exhibition, we had a chat with Troj to find out more about her masterful work and the ideas and influences behind it.

AR: Apart from artrepublic's Modern Masters, what Master – modern or historic, dead or alive, well-known or lesser-known – would you want to exhibit your work alongside Iva?

IT: Artemisia Gentileschi – a follower of Caravaggio and one of the most important Renaissance masters of all time (that most people haven’t heard of). I would be scared to exhibit next to her since the woman is an absolute giant, but I think viewers might appreciate the comparison.

AR: What is it about Gentileschi’s work that you find inspiring?

IT: It is not her visual vocabulary that has inspired me the most (although that’s impressive) but her visual grammar, as in the way she told her stories. While her contemporaries and most artists today, both male and female, treat women as mere pawns in a game of female representation that serves the patriarchal perspective, Gentileschi made women the owners of their own narrative. She is mostly known for specific circumstances in her life rather than her incredible art which is such a shame. It’s definitely time to change the narrative in art history.

AR: And what about figures beyond the art world? Is there anyone you consider to be a master of their industry?

IT: I am in absolute awe of people like Rozsika Parker and Griselda Pollock – two art historians that have opened many people’s eyes when it comes to the representation of historically marginalized perspectives in contemporary art.

Also, scientists like Neil deGrasse Tyson who have personally taken on society’s worst representatives for the sake of education in a world where ignorance is increasingly celebrated. That’s bravery added to mastery; one of the reasons why I studied for a second BA and a Masters in Science and Philosophy was because I wanted to come closer to that level of understanding of the world. Studying these subjects has greatly enhanced my art practice. It’s something I can definitely recommend.

AR: Speaking of your practice, do you have any studio rituals that you follow when you get into your space each day?

IT: Yes – I’ve been told it’s a slightly surprising ritual. I like listening to news shows and podcasts while painting. It’s how I keep the whole of my brain occupied. I find all that chatter about working in silence to be absolute nonsense. I don’t think humans can experience silence. Even in an isolation tank you’d hear your own heartbeat and that noise in your brain that’s constantly on. I deliberately avoid people who believe all of the world’s problems can be solved through meditation – it’s quite a hard thing to do in Brighton! Spiritual bypassing is as bad as watching commercial TV all day. I think more people should paint listening to John Oliver and Samantha Bee.

AR: If you're feeling uninspired, what do you do to regain your creative mojo?

IT: The only time I feel uninspired (which is almost never) is when I am overwhelmed by something mundane in my private life that would not be worth challenging through art. Conflicts inspire me and challenging conventional truths inspires me, so I read books or do theoretical research. The day I stop thinking about these things would be the day I start making bad art. Let’s hope that never happens.

AR: What is the best piece of advice you were ever given in relation to your work? Or, what advice do you wish you had been given?

IT: I wish that somebody had explained to me that skill and ideology/ philosophy go hand in hand in art. I also wish that somebody explained the male gaze to me when I was a girl so I would be aware of its pitfalls. If I understood that early on I would have prepared better. At the same time, understanding these things is a necessary part of the growth process.

AR: Finally, finish this sentence: When I was little, I always wanted to...

IT: …learn to paint so well that I could change the stories in Renaissance Art. I didn’t believe I could do it because I was a girl, but I secretly dreamed of being Leonardo, painting murals and building incredible machines. I never dreamed of being a modern artist like Picasso. Picasso had a huge following among my all male art teachers and, as a young girl, I thought that his art reeked of toxic masculinity.

Iva Troj is exhibiting her work as part of our Modern Masters exhibition, visit the exhibition, between 13th July to 15th August 2018 at artrepublic Brighton.